On the politics of offence 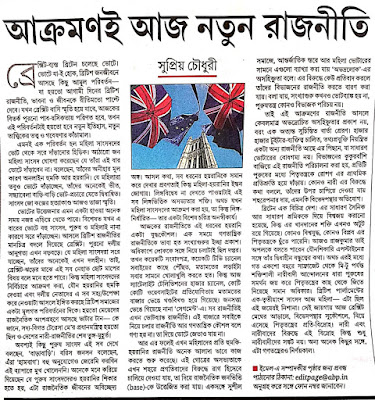 Brexit-busy Britain is due for an election. Amid the clamour, it’s quite difficult to bring up something other than the big BoJo-Jezza battle. However, the noise obscures the rapid and fundamental changes in British public life of a transformational sort. Long after Brexit is forgotten and today’s debates turn into stale pub-jokes, these changes will continue to shape British politics, life and ideas, and serve as raw materials for the future theorist.

One such trend is the increasing marginalisation of female MPs, 18 of whom decided not to run again. Just when it seemed that political participation of women is irreversible – Britain had a female Prime Minister only until a few months ago and two of the three shadow ‘great offices’ are held by women – history seems to be going back again. The women MPs stepping down cited the climate of harassment and intimidation, often unleashed very publicly on social media. Those who remained in the fray say that they feel afraid to knock the doors after dark. The memory of Jo Cox, the Labour MP murdered in Birstall in broad daylight for no other crime than her politics, is still raw in memory.

It is easy to overlook this trend as many MPs, male and female, are stepping down this time. Brexit has changed politics and political labels of yesteryear have shifted beyond recognition. Some of the female MPs stepping down have left their parties and now have no political constituency left to serve. It is also true that political abuse has not spared the male MPs. Yet, even in this climate, the female MPs standing down is worth a special note – this may be the start of a trend rather than a Brexit-induced disruption. Instead, this looks more like a long-term trend, a reversal in political participation of women, making Theresa May's premiership the last hoorah of women's politics in Britain.

The seriousness of the abuse has been duly denied – Boris Johnson has called the furore ‘humbug’ – by those who are benefitting from it at the moment. Jeremy Corbyn has met various requests for intervention with silence. Others, who raised the issue and spoke about online bullying of politicians in general, often failed to note the specificity of vitriol directed at women MPs. It’s always easy to sweep all abuse under one carpet and bemoan the general climate of intolerance, but when these become directed to a woman, whether one admits it or not, they become different because they are meant to be. The indistinction, which the gentlemanly types usually succumb to, is the very route through which sexism and racism creep into public life.

Such harassments are now an everyday tactic in contemporary politics. Not long ago, democratic politics was indeed about winning the majority mandate. Then, a few newspapers and a few TV stations reached a broad cross-section of population and ideas had to be debated in the open. But in the age of satellite TV and personalised social media newsfeeds, the public sphere has been segmented. The majority is now just a collection of opinionated, inflexible special interests. All politics has become politics of the vote-bank. There is no space for the politics of everyone anymore.

Right now, therefore, political harassment directed at women works at many levels. They are portrayed as expressions of political passion, unrestrained anger of an unfairly treated underclass to the urban progressivism the political women represent: Such conversations energise the political 'base'. At the same time, in more polite places or at international fora, these could be portrayed as evidence of the politics of intolerance, an excuse to shut down political expressions when it suits the government. Any protest against this bullying can be reframed as bullying and can be shut down using the legal provisions designed to counter bullying. All under the excuse that the majoritarian politics isn't vote-bank politics and being men can't be a politically divisive identity.

But this is not any spontaneous expression of rage, but rather a carefully calibrated messaging strategy! This is a different politics run by thousands of Twitter handles, WhatsApp groups and ever more sophisticated data analytics, Military psyops unleashed on the civilian population. It's a deceptively simple politics though - dog-whistling identity politics and implanting male chauvinism into every male alive on Facebook. In this dystopian world, any protest only feeds the cycle of division even more.

Britain is a strange country, after all. Its ordinary workers and ordinary soldiers have conquered the world, but all that only fed the powers of its aristocratic oligarchy even more. It's okay for Prince Andrew to be glib about his connections with Epstein, except that he was not supposed to talk about it. Hundred years of struggle - Suffragette to #MeToo - has given political women an identity, but one that, in the best British tradition, followed the 'do not embarrass' principle and left the British patriarchy in its place. However, in the perfect storm of the new politics of social media and Brexit divisions, Patriarchy is emergent again and it is seeking to roll back the gains made by political women. Therefore, this attack on women in politics isn't just an issue for the women concerned: Rather, it's a crossroad for the participatory politics in general.